Elizabeth Packard, Gaslighting, and the Truth

Gaslighting: a tactic in which a person, in order to gain power, makes a victim question their sanity.

Elizabeth Packard was born in Ware, Massachusetts, to Samuel Ware, a minister, and his wife Lucy. After graduation from school, at the urging of her parents, Elizabeth married Theophilus Packard, a staunch Calvinist pastor 14 years her senior. They lived in Western Massachusetts until September of 1854, then moved to Kankakee, Il, where they raised their six children.

Theophilus was cold, hard, and domineering, and had a habit of going overboard on the fire and brimstone side. Making statements about how his family could “act so glib as those who were on their way to hell” weren’t beyond him. In time Elizabeth grew weary of living with a man whose heart was rock-hard. She started voicing her disagreements to him—and others at the church where he pastored. Their disagreements on slavery (she was against, he for) and how their children should be raised added fuel to the fire.

In 19th century America, married women had no legal rights to their property, children, any income they earned, even themselves. A wife was her husband’s property. He could even commit her to an asylum for the mentally insane if they wished for almost any reason.

On June 18, 1860, Pastor Theophilus Packard had his wife Elizabeth committed to the Jacksonville Insane Asylum in Jacksonville, Illinois. She had no legal recourse. He charged her with being “slightly insane from excessive application of body and mind.” She would later be diagnosed with “moral insanity” at the Asylum. Elizabeth was taken from her home and six children and placed in the Seventh Ward. No visits or letters from her children were allowed. To her surprise she found that most of the women in the Seventh Ward were not only quite sane, but married, having been sent there by their husbands. 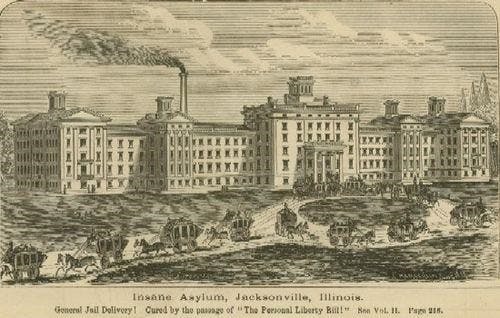 The Jacksonville Insane Asylum, circa 1850s

The Jacksonville Asylum was run by Dr. Andrew McFarland. His methods of diagnosing and “curing” his patients ran the gamut from bizarre to cruel. Expressions of emotion by the women were frowned upon, and deemed “evidence of insanity.” One attendant told a resident that, “You mustn’t cry – you are getting worse – you can’t go home until you stop fretting.” One psychiatrist wrote that expressing a yearning to go home “is always a suspicious circumstance and always a sufficient warrant for delay and evidence of a lingering spark of disease.” The guests at Jacksonville were expected to become automatons to the point where they submitted to anything their husbands wished.

Discipline for those who got out of line was brutal. Women were chloroformed, drugged, dragged on the floor by their hair on the way to solitary confinement, beaten, placed in straightjackets, or waterboarded. “The beatings will continue until morale improves” was standard operating procedure. Dr. McFarland was in agreement that staff should use such measures as needed to cure the asylum’s residents of their insanity.

Elizabeth, a strong Christian with a devoted prayer life, organized prayer meetings in the Seventh Ward to bring comfort and encouragement to the women. As she witnessed and heard stories of the abuses in the Asylum, her spirit was provoked, and she confronted Dr. McFarland. Days later, Elizabeth was transferred to the Eighth Ward.

As Elizabeth walked into the Eighth Ward, she was hit with the “most fetid scent at the pit of my stomach.” She heard women “screaming, fighting, running, hallooing” and described their hair as “rough, tangled, flying, and streaming.” Those who ran splashed in “unfragrant puddles of water”—their own urine. Some of the residents smeared excrement on the walls. The Eighth Ward was packed with women who were not only insane, but violent. Dr. McFarland intended to break Elizabeth by banishing her to the Eighth. She was put in a packed dorm room with five other women, and given a bucket to relieve herself in. In her journal she described her first night in the Eighth as “the blackest night of my existence.”

The following morning, Elizabeth chose to stand and make a difference rather than collapse: “The only way I can carry my own existence is to carry the sorrow of others. I determined I would not be crushed, neither would I submit to see others crushed… I determined to be a living reprover of the evils I saw consummated in this Asylum.”

She carried this out by washing and cleaning the 18 women who lived in the Eighth. This was neither easy nor safe. She bathed each of them by hand, then washed and combed their hair as best she could. In the beginning it took one day to wash each woman; the built-up dirt and grime was so thick it took hours to remove.

After she’d cleaned one woman, the lady sat at Elizabeth’s feet, quietly toying with Elizabeth’s dress. Elizabeth leaned over to kiss her forehead… and the woman instantly stood and struck Elizabeth with a blow so fierce she was knocked unconscious.

Elizabeth would spend the rest of her 3 years at the Asylum in the Eighth Ward, loving others who couldn’t repay her in spite of the risk involved. When she was released, it wasn’t because McFarland deemed her “cured,” but because he grew weary of trying to break her. Unknown to Elizabeth, Theophilus was incensed with McFarland for releasing his wife and wanted her kept in the Asylum indefinitely.

Theophilus took their six children to Massachusetts, leaving Elizabeth alone in Illinois, without income. She stayed with friends, and then Elizabeth Packard became a one-woman force. She spent the rest of her life advocating for the rights of married women and those who were unjustly sent to asylums. She published a series of books exposing the abuses at Jacksonville. Due to her efforts, the legislatures of Illinois and Massachusetts passed bills allowing married women equal rights to their children and property. She founded the Anti-Insane Asylum Society. None of these battles were easy and she often found herself the target of the medical establishment, including Dr. McFarland, who fought hard to defend his integrity after she exposed his abuses in her books.

What was most gratifying to Elizabeth was that she got her kids back. After the bill in Massachusetts passed that gave women legal rights to their children, Theophilus turned them back over to her. All six lived with her well into their adult years. One of her sons was an attorney who assisted her in her efforts to fight for the rights of women and those who were unjustly sent to asylums.

Elizabeth describes what drove her in this rebuttal she gave to a former soldier who was trying to get her to back down:

“Back down! Do you gain your victories on the battlefield by backing down, or do you face the enemy with the boldness and assurance which the truth and justice of your cause inspire? I never back down on the truth, and if you count on that kind of conquest I assure you defeat!”

Elizabeth Packard was driven by the truth, and willing to pay the price to do whatever it took to make significant change.

The practice of gaslighting is alive and well in the church today by the Theophilus’ and Dr. Mcfarland’s of our time, such as:

When a husband blames his wife for his sexual sin or attempts to justify it. “If you were just giving me more sex, were nicer, didn’t….”And then there’s the classic “Scripture commands the wife to submit to the husband so you need to submit to me no matter what I’m doing.” Of course, they ignore Ephesians 5:21 – “and subject yourselves to one another in the fear of Christ” the verse before Ephesians 5:22. Nothing like a little proof-texting.

And then there are the Dr. McFarland’s of our day, the pastors and the counselors with letters behind their name, who proclaim her husband’s sin the wife’s fault because she was too controlling, codependent, didn’t give him enough sex, or whatever diagnosis they want to lay on her. I have heard stories of pastors who told women they needed to “submit to your husband even though he’s a porn addict.” In other words, sit there, take it, and stuff your heart without setting boundaries with consequences while he continues to sin and hurt you. Just like they did in the Jacksonville Asylum. The message is that the wife’s heart doesn’t matter.

No need for the Eighth Ward with counselors like that. When Letters or a spiritual authority like a pastor says you’re morally insane, well, that’s enough to flip anyone out.

There are many counselors and pastors out there doing good work. There are also many husbands who are broken, repentant, and willing to do whatever it takes to heal their marriage. This doesn’t apply to everyone. But we hear enough stories of wives who’ve been gaslighted by their husband, a pastor, or a counselor to know that this is far from a rare occurrence in the church.

It goes back to arrogance. Today there is a flow of stories in the news where the leadership of churches and other Christian organizations are being exposed for covering up sin or being abusive. An Ohio megachurch just parted ways with their pastor over claims of “harshness and fear based leadership.” The successor to John Piper’s former church, Bethlehem Baptist, just resigned over charges of abusive behavior of church leadership. Every week pastors are being arrested for illegal porn or sexual or physical assault. This week an Alabama pastor was arrested for domestic violence. There’s the ongoing debacle where the Baptists covered up hundreds of cases of sexual abuse in their midst. Ravi Zacharias. Marc Driscoll. Carl Lentz, Bill Hybells. And hey, a Pennsylvania Bible College just awarded honorary doctorates to its own trustees, a practice that’s discouraged by the state of Pennsylvania.

It’s hard to tell an arrogant church leader that their church is corrupted with sexual sin. This would mean that they’ve fallen short; their teaching or theology isn’t enough.

It is actually reported that there is sexual immorality among you, and of a kind that is not tolerated even among pagans, for a man has his father’s wife. And you are arrogant! Ought you not rather to mourn?
1 Corinthians 5:1-2

Theology is important, but it’s a part of how we carry out Jesus’s mission to set captives free, (Isaiah 61), equip the saints for the work of ministry (Ephesians 4:12), and train them to be overcomers and spiritual warriors (Revelations 2-3) who will fight for the truth and make their lives count for eternity as Elizabeth Packard did. The dark times we’re in demand that we take action and get in the fight.

I’ll leave you with the following:

No marriage can heal until the husband takes full ownership for his sexual sin, with no strings attached.

Are you making your life count for eternity? Many Christians aren’t. The lack of urgency and prayer-fueled, Holy Spirit-fired, passion is missing from many pulpits. Many of them barely acknowledge that our country is in a moral collapse on Sunday morning, or that people are falling away from the church in droves. You will have to go rogue and go hard after God if you want your life to make a difference.

As Elizabeth Packard did, you will also need to be willing to pay the price.

I can tell you that every battle is worth it. 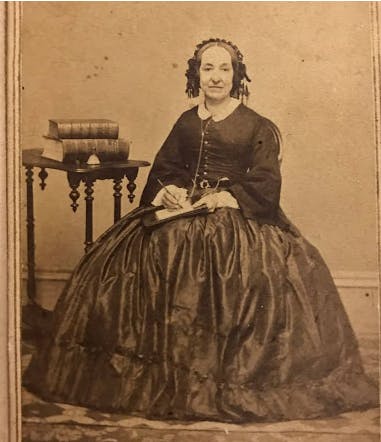 I highly recommend Kate Moore’s book, The Woman They Could Not Silence, which tells Elizabeth Packard’s story in more detail I could show here. After Elizabeth was released from Jacksonville, Theophilus was hours away from getting her committed a second time to an asylum in Massachusetts but was thwarted.