Attend the Rogue Conference in February

Now that the election is over, have you noticed that the calls for repentance and prayer have dried up? Why is this? Do we only pray fervently for our country when an election approaches? Surely they don’t think the moral abyss we’re freefalling into has become a cavern of light, do they?

With four years in front of us of an administration that has gone on record saying they want to pass legislation that will take us into deeper levels of depravity, the calls for prayer and repentance must be intensified, not set aside.

So we can do one of two things:

* The same we’ve been doing, which is attending entertaining, prayer-less church services where God’s people continue to live isolated lives and are unequipped for the intense spiritual battles ahead. Or-

* Go against the grain of status quo Christianity and take the action steps that can make a difference.

If you’ve read my book The Rogue Christian or you watched 30 Days of Prayer you’ve seen what many of those action steps are.

Today I want to challenge you to consider hosting a Rogue Christian Conference. The Rogue conference will be a time of healing, equipping, and prayer with other like-minded believers who want their lives to count for eternity and aren’t content watching the moral collapse and doing nothing.

Your part would be to provide the place and get the word out. Don’t worry about getting a big number. 30 or 40 committed believers is plenty. I would fly out and lead it.

If you’d rather attend a Rogue Christian Conference before hosting one, come to the conference in Jamesport, Missouri on February 20: 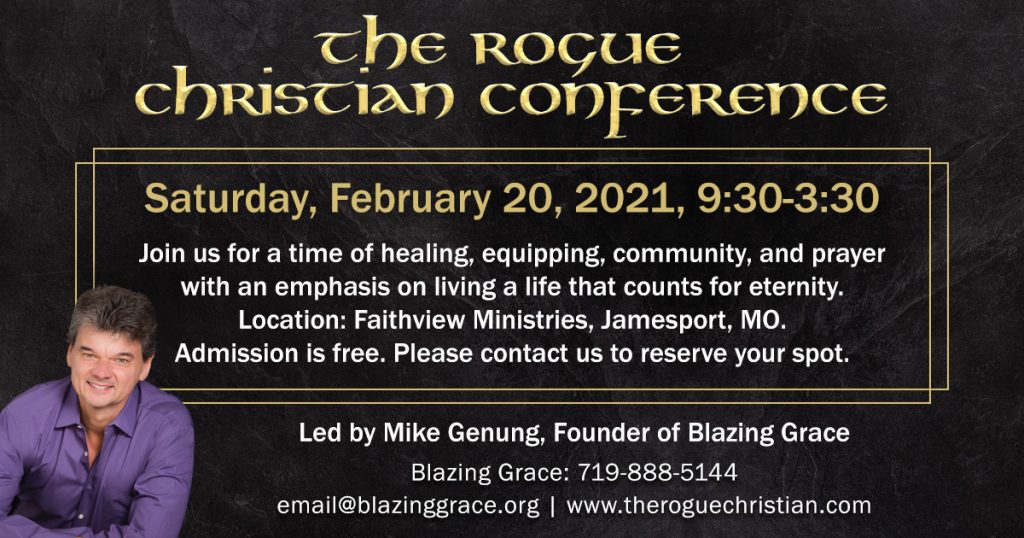 We must not sit idle in the months to come; it’s critical that we go rogue and start building a movement of prayer, repentance and equipping at the grass roots level.

This invitation is open to anyone from any country.
Reply to this email if you want to start a discussion. This offer is open to persons in countries outside the US too.

This is the time of the year when many make their decisions on charitable giving. If you believe in what we’re doing and would like to partner up with us financially, go to the Donation page on the website. Blazing Grace is a 501c3 non-profit organization and donations are tax-deductible as allowed by law.

You can also support us with Amazon Smile, where a portion of your purchases on Amazon are donated to the ministry of your choice. To get set up, go to Amazon Smile and select Blazing Grace as the organization you’d like donations made to. There is no extra cost to you.