Turn and Connect for Wives 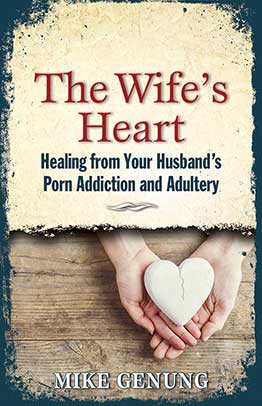 Earlier this month, I wrote about “Turn and Connect,” the Biblical method which provides the way to overcome lust, fear, and other issues, which is written about in detail in The Road to Grace, for those who struggle with sex addiction, and The Wife’s Heart, for hurting wives.

Here’s the first part to get you started. You probably know people who could use this information so I encourage you to share this page freely.

From Chapter 8 of The Wife’s Heart

My husband says he is fine now that God has forgiven him, and doesn’t need an accountability partner. He said I should be “over his little porn habit.” I still have outbursts of anger; my emotions are easily triggered. I have forgiven him and pray all the time for God to help us both. I wonder if he is being honest with me since he says he’s fine every day and nothing affects him anymore. As far as seeing beautiful young girls or anything that could trigger him. Does anyone understand how I feel? I have such a hard time with insecurity and fear.

In 1991, several weeks after I’d committed adultery with a prostitute, Michelle and I went to see a movie. Without knowing the content, we chose Dutch, about a man played by Ed O’Neil who is dating a divorced woman. In one scene, while Dutch is parked in his car, a prostitute opens the back door and jumps into the backseat.

That scene hit Michelle hard, and she started crying. I felt horrible and wanted to crawl into a hole. The rest of the day was spent in confused, tormented silence, with me not knowing what to say and my wife treading water.

One year later, Michelle and I were visiting a couple. As the husband, a Christian, was watching a movie, a sexually charged scene came on with female nudity. The moment that scene hit, I turned away until it was over (my friend’s eyes were glued to the screen). When I looked up at Michelle, she mouthed the words “thank you.” What could have triggered her pain and insecurity turned out to be a good thing when she saw that I honored her by handling temptation the right way.

Let’s look at some triggers and what causes them:

When it comes to triggers, the Big Four are fear, anger, insecurity, and pain. Fear run amok can lead to anxiety and panic attacks. Some women end up on antidepressants or other medications because their nervous systems are fried.

Unchallenged insecurity can drive you into depression and discouragement, and maybe more meds.

If you invite anger to take residence in your heart instead of allowing it to pass through, it will fester into bitterness and harden your heart.

Then there is your wound. How do you protect it from being salted by outside forces?

Read the rest of the chapter here:
https://www.blazinggrace.org/triggers-triggers-everywhere-the-wifes-heart/

All of chapter 5 from The Road to Grace, Turn and Connect, is available at the website at: https://www.blazinggrace.org/turn-and-connect/.