The Problem with “Positive and Encouraging” 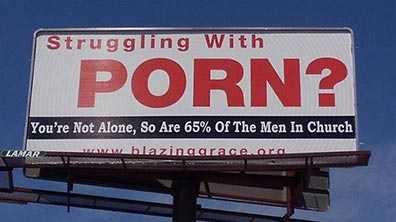 In 2006, we ran a six month billboard campaign here in Colorado Springs, as the picture above shows. At the time, the response we received was overwhelmingly positive, with people asking for help and expressing appreciation that we were publicly exposing an issue that is often hidden.

In the space of 12 years, why did the Christian community go from “thank you” to “shut it down!” for the billboard campaign?  Our culture has fallen into every kind of sexual depravity since then, and the images of lust are everywhere, including the grocery store. The need for the message of hope and freedom for the sexually broken and their spouse is greater than ever.

We are carpet-bombed with messages from today’s Christian media such as “positive and encouraging,” and “safe for the whole family.” While I know these are marketing catch-phrases, you have to realize that those organizations have studied their audience and looked for the button to push that will get people to buy into what they offer. Where did this come from, and how is it affecting us?

In the 1990s, the seeker friendly movement started to take hold in the American Church. Their philosophy was for the church to become attractive to the unchurched who had been “turned off by God.” Since topics like sin, hell, and sex didn’t make people comfortable, the seeker-friendlies avoided these topics and others that might be perceived as controversial or negative.

One of the founding churches of the seeker friendly movement is based in Chicago (today they now have more than 20,000 members). I visited that church on a Sunday in 1995 during a business trip, curious as to what their service would look like. They had one praise song, one solo by a polished singer, and a short sermon on marriage by the senior pastor, who spent little time in God’s word. I came away feeling like I’d watched a show versus being in the presence of a holy God. (Last year, 10 women accused the founder of that church of sexual harassment, and he was forced to resign.)

Years of the seeker friendly movement and being repeatedly exposed to messages such as “positive and encouraging” and “safe for the whole family” have had the effect of softening the church, even those that aren’t seeker friendly. Today we are reaping the fruit of a church that avoids the hard topics.

The following is a quote from George Barna on a survey of pastors his organization did recently:

“When we ask the pastors about all the key issues of the day, 90 percent of them told us, ‘Yes, the Bible speaks to every one of these issues,'” Then we asked them: ‘Are you teaching your people what the Bible says about those issues?’ Then the numbers dropped to less than 10 percent of pastors who say they will speak to those issues.”

Last week, I sent out an article about depression and suicide, and what to do about it. The response caught me off guard – many of you shared your struggles with depression or other forms of mental illness with us, or told stories of close friends or relatives who were either in the same place, or had committed suicide. We received more response from that article than any other. Surveys are showing that suicide is growing, especially at the teen level, and depression is an epidemic.

Satan must be laughing.

The problem with “Positive and Encouraging” and “Safe for the whole family” is that these messages and others like them have brainwashed Christians into believing that the Christian life, our churches, and our homes, should be “safe places” where no one should be disturbed, have their comfort zones challenged, or have to deal with hard issues. In other words, we don’t want to offend anyone. Sound familiar?

In this article, today’s college students are clamoring for what is now being called “safe spaces,”… “where they can get together without being exposed to ideas and speech that make them feel uncomfortable.”

In this time when the world is going dark, we need ministries and churches to understand that our job is to be the tip of the spear in fighting for God’s people and equipping them to be the blood bought, Holy Spirit infused, Biblically equipped, warriors and overcomers that each of us is called to be in Scripture. Without realizing it, many churches have been influenced, corrupted, and softened by the spirit of this age – tolerance – which says that “every man can do what is right in their own eyes, and anyone that dares come against this philosophy must be silenced.” (This is nothing new – read the book of Judges).

Not every church is under the spell of tolerance, but when we read that only 10% of pastors are addressing the issue of the day through God’s word, we’ve got a serious problem. Revival is impossible unless a church is willing to face its sin.

I’m sick of hearing “we don’t talk about… (fill in the blank)” in church. Are you?

2 responses to “The Problem with “Positive and Encouraging””